Project Name: NON FORMAL PRIMARY EDUCATION (NFPE)
Songshoptaque feels proud to enhance non-formal primary education among the underprivileged
children of our society. Keeping it in mind, it extended its helping hands to meet the Millennium 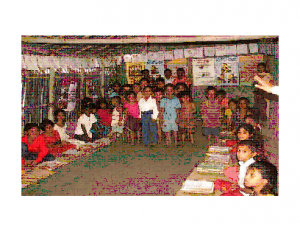 Development Goals (MDG) of the United Nations by 2015.

and belong to the poor and deprived families had been
selected to be enrolled in ESPNFPE schools. Class size has
been strictly limited to 30 children per school. Sincere efforts
have been made to avoid children those who have strong
learning disability during the selection of learners.
The program has been monitored regularly by ‘Monitoring
and all technical supports provided by TSS and both 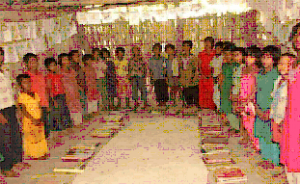 Songshoptaque and BRAC. One supervisor and ten NFPE
teachers had been recruited to runthis program.
At 2nd phase by the end of 2011, no children have been reported to drop out from the NFPE schools.

Three hundred (300) students received NFP education from Songshoptaque operated schools and most of them got 100% readmission into class four of the formal educational institutions.

Among the NFPE graduated students 220 (80 %) were girls and the rest 80 (20%) were boys.
Getting a tremendous success in providing non formal primary education at Anowara, after the
completion of the course, Songshoptaque has extended this program to next 08 NFPE schools in the
year of 2012 to 2016 at the coastal belt of Anowara upazilla.